Remember, every time you laugh a terrorist starts itching in a place they can’t reach. Make the terrorists itchy: Buy a funny book.

Stuff About Junk, or: Clamoring About Clutter


I’m going to go out and do fun spring stuff for a while!

Okay, not really. But my daughter has delayed her garage sale until Kendallville’s city-wide sale, May 22-24, so I’m going to take the opportunity to go through the whole house for anything decent enough to sell that I haven’t touched in recent years. If it’s not decent—trash. There’s a lot of it. (My new books will also be for sale at her sale—not quite a book signing, as I’ll only be there part of the time.)

Going through so much stuff confirmed what I already knew: I have too much stuff. Isn’t that something? I live in a house that was built originally with very little storage space, because back then extra stuff was just not that important. Today people rent storage units, because they’ve got too much stuff they never use. It’s kind of silly.

So, I have pledged to get rid of a lot of my stuff. I’m un-junking, de-hoarding, messing with my mess, Avengers de-assembling. (Oh, and I’m going to see The Avengers, too.) I’m even getting rid of some of my books. No, really. I’ll cry a little, but I’ll get over it.

So I’ll be around, but not as much until my de-stuffing stuff and home maintenance things are done. I suppose I’ll get a column out of it. Meanwhile, if you’re my fans, friends, or innocent bystanders, spread the word about my books for sale, please! Then I can buy more stuff. (Kidding! It’s bill paying time.)
Posted by Mark R Hunter 2 comments:

Print books are in. With words, and everything!


The print run of Slightly Off the Mark: The Unpublished Columns is here, but we could run out quickly! (Not really, we’ll just order more.)

You can get a signed copy on my website at http://www.markrhunter.com/ using PayPal, or do that whole credit card thing. Or, you can get a print copy on Amazon and pair it with the Kindle version at half price. Or, just shoot me a line and we’ll make arrangements.

Needless to say, order any of my other books there, too! I’m not all about the funny. Some people feel very strongly about that.

The Official Announcement, Now That You Already Know


This is what I was going to post to get the ball rolling on the release of Slightly Off the Mark: The Unpublished Columns (which are now the published columns). But now it’s up on Amazon, and on the website, and … we just got our delivery of print copies!

“I turned around a few minutes later, walked into the Albion New Era office with the aura of confidence and skill, and said ‘I changed my mind. Pleasssseeeee!!!!!!’”
--Slightly Off the Mark, from “Why I write, or: I hate needles”.

Thus began my career as a humor columnist, which resulted in some 1,150,000 words over the next quarter of a century.  Now, although my column has moved to the monthly Kendallville Mall, I’ve collected all my unpublished earlier columns into one volume.

It’s a short book, but my fourteen regular readers have short attention spans, so it’s all good. Now I’m asking you, my other hundred or so readers, to purchase Slightly off the Mark and then actually read it, and then tell all their friends. It’s a lot to ask, but I have no shame.

You can find links to all the ways you can get the Slightly Off the Mark on my website, www.markrhunter.com, or at regular internet places, and soon I hope to have news on such things as book signings and other places where you can get a copy. Or, knock on my door, or stop me in the street. Not in the middle of the street … maybe wait for me on the sidewalk.

To show you what you’ll be treated to—I hope that’s the right word—the book is divided into sections including:

Part One: because someone has to go first
Part Deux: the final second
Part Three: medical stuff, and things
Part Four: the writer’s life for me, or: Brother, can you spare a dime?
Part Five: how do you spell miscellaneous?
Part Six: part two of the writer’s life, or: Six into two makes … something
Part Seven: politics, or: Maybe you shouldn’t read this section—(my editor didn’t)
Part Eight: What’s the sundry word for miscellaneous?

If that’s not enough for you to part with your Starbucks money, at the end of the book you’ll find the first chapter of my upcoming space opera novel, Beowulf: In Harm’s Way. There’s humor there, too. Really, there is. I would recommend you pay particular attention to that part if you’re, say, a publisher, or an agent. 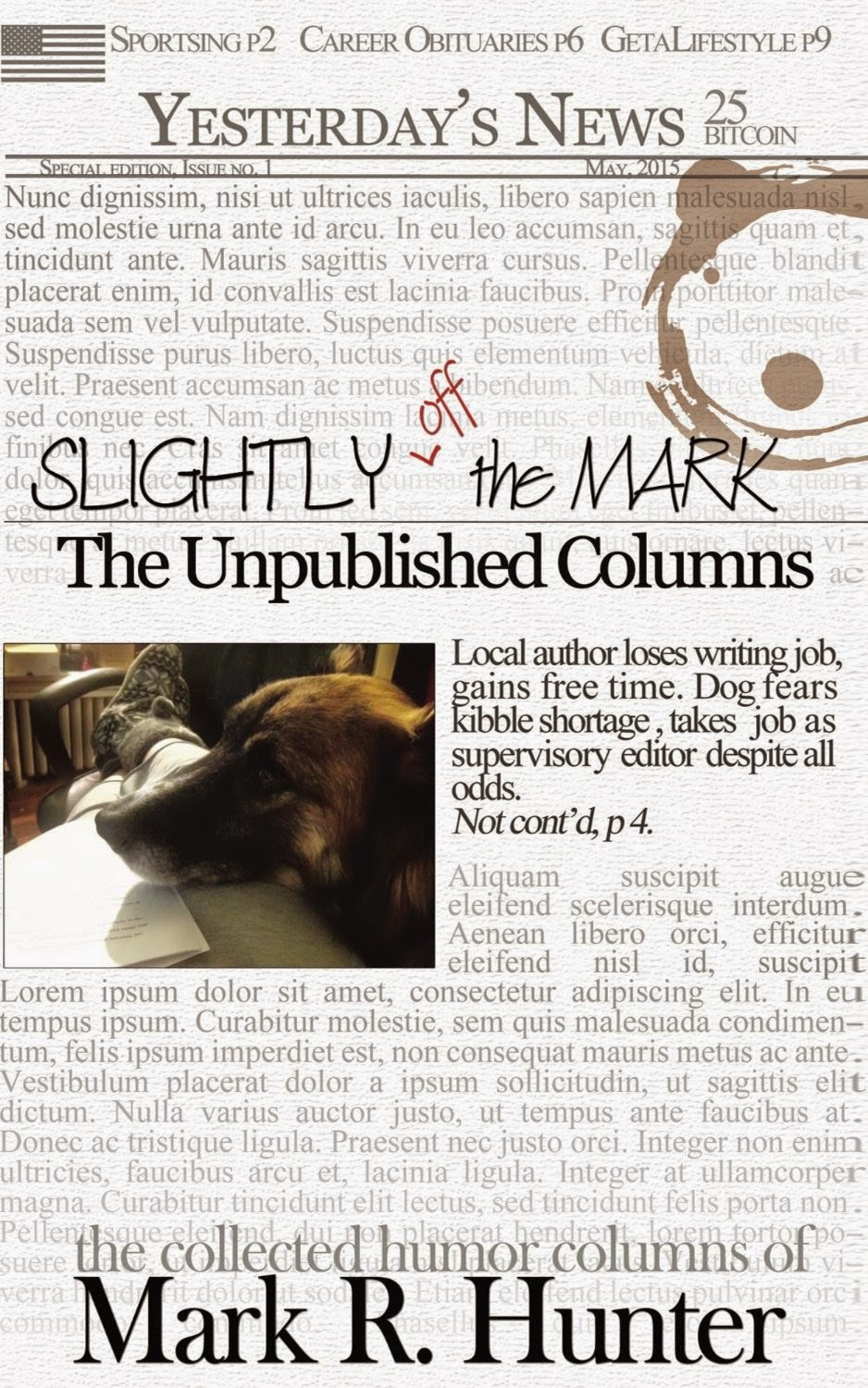 Bites, and Sniffles, and Other Joys of Spring

There’s no such thing as the perfect time of the year. Having said that, a bad day in summer is better than a good day in winter, and if you don’t believe me, ask a meteorologist. Do you know that of all assaults on forecasters, 95% happen during winter? This year, Boston weathermen had to go into the witness protection program.

The other 5% happen during heat waves, which proves my earlier point.

In spring, exhausted sprouts poke through the slush, and hungry deer stop shivering for the first time since November. Those who weren’t hit by cars, I mean. People love flowers, and deer—that aren’t in their driving path. People don’t love mosquitos, but they also come out every spring. Deer don’t love mosquitos. Nobody loves mosquitos. Other mosquitos, I suppose.

Yet there they are, and I’d rather be bitten by fifty mosquitos than experience the definition of “wind chill factor”. It’s a comparative thing, but it’s not apples and oranges: It’s liver and Brussels sprouts. I’d rather eat fifty Brussels sprouts than one piece of liver, but that doesn’t mean I like them.

During a trip to Missouri, I discovered after about a dozen bites that I was allergic to their mosquitos, which are just like ours but talk like Mark Twain. As I lay there suffering, I thought: “Hey … I’m not cold!” Granted, I was running a 101 degree fever at the time, but still.

I got tested a few years ago, and found out I was allergic to every substance humans can be allergic to. (Except foods. I have no explanation.) That would seem to make summer a bad thing, because that’s when the allergens come out.  Coming into contact with many things causes a severe reaction: Bugs, mold, dust, bikini ladies …

Well, my wife said I’d suffer if I came into contact with bikini ladies, so that pretty much qualifies as an allergy.

But it turns out I’m also allergic to winter. I’d always said that, but now I have medical proof: the diagnosis of Seasonal Affected Disorder, which means the short, cold days of winter make me feel lousy. This has probably been a problem from the first time humans ventured north to cross the land bridge into America:

“I just don’t feel like getting out from under the bearskin.”

“Ogg, you have mastodons to hunt and cave drawings to—draw. Now, get out there or it will get glacial in here!”

At least they didn’t have to do spring cleaning for another 30,000 years.

Then there are tornadoes. Although twisters can happen any time of the year, in northern Indiana they’re most common while you’re grilling at the picnic, rather than shoveling snow. Can you imagine the drifts? That should be the next Syfy original movie: “Snow Tornado”, staring Pauly Shore and Shannen Doherty. “Watch as Corey Feldman’s frozen body gets sucked into an ice funnel!” I’d watch it.

But again, no one has ever frozen to death during a tornado. In fact, the average tornado is around five hundred feet across and on the ground for five miles, while the average snowstorm named by The Weather Channel lasts three weeks and affects 93 million people in nineteen states, and hits Boston twice.

Also, tornadoes give some relief in heat waves. According to my calculations, on a 90 degree day a three hundred mile an hour wind produces a wind chill factor of 64.2 degrees. That’s close to perfect. Granted, there will be issues with holding down your picnic, but I’ll bet no ants show up.

In short, I wasn’t crazy when I got in my car the other day and gave a happy cheer at becoming uncomfortable warm before I turned the heater on. I love Indiana two-thirds of the time. Insect bites, heat exhaustion, and uncontrollable sneezing are just part of the charm.
If you don’t believe me, ask the guy who slipped on the ice last January, got buried in a snow drift, and couldn’t reach his phone because it was under five layers of clothes. I mean, if you can find him.