I’m not going to lie to you: 2014 sucked.  Everybody got sick or hurt at least once, and the world’s a train wreck. On a personal level I lost my first writing job after twenty-three years of steady work, and the book sales that might have made up for it have stagnated. On a family level I can’t even say “at least we have our health”.
But I can’t dwell on the bad stuff—there lies madness, and don’t we have enough madness? I have a new part time writing job and people are, if not healed, being taken care of as best can be. The world’s still a train wreck, but I think maybe the world’s always been a train wreck to some extent.
My intention for 2015 is to keep making people laugh, and to write. A lot of things in life I can’t control, but that I can do. And laughter is, if not the best medicine, a pretty good preventative. I should soon be done with my contracted book, then we’ll get the “Slightly Off The Mark” book out, then it’s on to more writing and, hopefully, publication. My simple goal is to make 2015 better than 2014 was. Shouldn’t be too hard.
My challenge to you is the same. Maybe you can’t change the world, fine. Then make your part of the world a little better. Cheer up yourself and others. Do good things. Think good thoughts. Be prepared. That’s the best anyone can do.
Oh, and buy my books; always be closing.  Happy New Year!

Intangible Hearts: Recent Book Reviews and Recommendations: Kevin Turner is a reporter on the run from...Yikes! Zombies. As if the world isn't weird enough, this author creatively inv...
Posted by Mark R Hunter No comments:


Remember to check out our free short story on PDF, featuring Chance and Fran from “Storm Chaser”, The Notorious Ian Grant”, and “Storm Chaser Shorts”.
“Another Family” is set before the books and features two cops, a surprise snowstorm, and a special guest who needs police assistance. Oh, and family. You’ll find it on the website at http://markrhunter.com/extras.html
If you like it, check out the books and don't forget to leave a review. But most important:   Merry Christmas!
Posted by Mark R Hunter 2 comments:

Speak of the Devil: Eight Reindeer Of The Santapocolypse

Speak of the Devil: Eight Reindeer Of The Santapocolypse: Some links before we get things underway. Norma had her Christmas letter.  Parsnip wrote about the winter solstice  (and a birthday), as w...
Posted by Mark R Hunter 2 comments:

Three Hoodies Save The World: Annual book round-up part 2.: Now for the second part of my fave books which will make great presents, and not just for Christmas, and another not, not just for others. I...
Posted by Mark R Hunter No comments:

Three Hoodies Save The World: My annual round-up of boooks - as it's Christmas.

Three Hoodies Save The World: My annual round-up of boooks - as it's Christmas.: Welcome to my first annual book list and, as it's Christmas, what great gifts they would make. Poetry My first, and only love in poetr...
Posted by Mark R Hunter No comments:

All I want for Christmas is a free short story


Here’s our Christmas present to everyone: A free short story on PDF, featuring two characters from “Storm Chaser”, The Notorious Ian Grant”, and “Storm Chaser Shorts”.
“Another Family” is set before the books and features two cops, a surprise snowstorm, and a special guest who needs police assistance. Oh, and family. Merry Christmas! You’ll find it on the website at http://markrhunter.com/extras.html 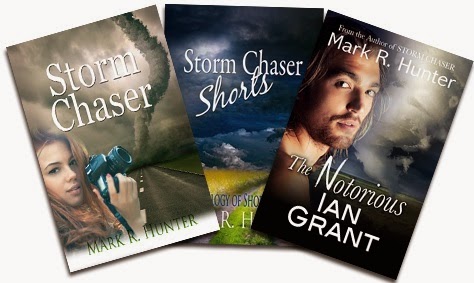 I’m Dreaming Of An Evergreen Christmas

SLIGHTLY OFF THE MARK

When we put up the Christmas tree last year, our dog became very puzzled.
“Dude, there are all kinds of trees surrounding this house already. Seriously, just come outside with me next time. Mind the yellow snow.”
Amazingly, he said all that with a glance.
If you take an objective, dog-like look at America’s Christmas traditions, you quickly realize we’re a little crazy. We bring a tree inside; we haul electric lights outside. People who refuse to listen to music that’s not still in the top 40 happily sing carols that were written by people who thought the Earth was flat.
(It’s a sphere; just thought I’d throw that in.)
And we celebrate Christmas on December 25th, even though most experts agree Jesus was actually born in the spring. Why? Because it’s close to the shortest day of the year. What else are you going to do in late December? Go to the beach? Get that garden in? Take a road trip to Buffalo, New York?
I doubt very much if Jesus would care when we celebrate His birthday, especially since the truly important Christmas holiday is Easter. By then the days are much longer, so we don’t need the pick-me-up.
The Christmas tree is one of the most interesting and puzzling aspects of Christmas decorating. It’s also big business: Trees in all fifty states are grown for the express purpose of being chopped down in a celebration of life. I used to drive through an area of Michigan that had more trees than Indiana has deer on the roads.
The origins of that tradition make sense, though: In ancient times, anything that stayed green all through winter held special significance. Without evergreens, people in past winters would sometimes completely forget what color was. It was like being stuck in a 50’s TV show, without the laugh track.
Evergreen boughs, hung over doors and windows, were reminders that spring would return. They also helped keep away witches and evil spirits, and as a bonus could be garnished with garlic to fight off vampires. So far as I know, they did nothing against banshees or marauding politicians.
But it was the Germans who, with ruthless efficiency, decided to just bring the whole darned tree inside. Martin Luther added lighted candles to the tree, bringing us the Christmas tradition of homes burning down.
Christmas trees didn’t come to America until the 1830’s, when German settlers arrived with the tradition. Naturally, the neighbors were curious:
“So Hans, why did your house burn down?”
“Oh, I brought a tree inside and hung candles on it.”
“No, seriously.”
A lot of Americans were against anything like carols and trees anyway. People in New England got fined for hanging decorations, although it was legal to hang witches, as long as you didn’t decorate them.
Then, in 1846, Queen Victoria and Prince Albert (of “in the can” fame) were seen standing around a Christmas tree. Suddenly it was all in fashion, even though hanging witches didn’t catch on at all. They were often decorated with popcorn, berries, and nuts, a great idea to guard against food shortages. (The trees, not the witches.) Rodents were a problem. (With the trees. Well, maybe both.)
Then, in 1850, Christmas trees went up for sale commercially in the United States. Next thing you know the early version of Wal-Mart, then known as “Mart”, got ahold of it, and the rest is history. They went up in Rockefeller Center, at the White House, and in Woodinville, Washington, where a 122 foot tall, 91 year old Douglas fir does not get cut down every year.
I like that idea, of leaving the Christmas trees alive. I don’t like the idea of going outside in December to look at them, so never mind. Besides, since 77 million Christmas trees are planted each year in an industry that employs a hundred thousand people, closing the business down would result in an unhappy holiday for many.
I used to love having a live tree. The wonderful scent, the look of it. Then I grew up, and after that I loved it for three days: From after it was up until it started dropping needles.
There’s a reason they’re called needles.
Now I have an artificial tree. I love my artificial tree. It looks exactly like a real tree if you squint a little, and I’ve never had to tweeze a single needle out of my foot. The dog, while still puzzled, doesn’t harass it. It has never burst into flames, not even for me, and I can break anything.
It doesn’t dry out, or spoil, and I don’t have to dispose of it every season. It’s durable and doesn’t wear out for years.
It’s a lot like fruitcake.
Ah, but that’s another puzzling tradition.


We sold several books at the signing Saturday, and got to talk to some great people. Thanks to the Kendallville Mini Shops for hosting us! One visitor picked up books for her relative in Ohio, and another recognized me and bought The Notorious Ian Grant because she liked Storm Chaser so much.

Thus ends book signing season—this year. You won’t be hearing much from me for several days as we finish a deadline for the new book project, but my Christmas “Slightly Off The Mark” column is up in the Kendallville Mall. If you don’t get it in the mail and you’re in Albion, pick it up from the box outside of the Albion Village Foods or check out “blogs” at 4countymall.com.
Posted by Mark R Hunter 2 comments: